Generating data with entropy, or random number generation (RNG), is a well-known difficult problem. Many crypto algorithms and protocols assumes random data is available. There are many implementations out there, including /dev/random in the BSD and Linux kernels and API calls in crypto libraries such as GnuTLS or OpenSSL. How they work can be understood by reading the source code. The quality of the data depends on actual hardware and what entropy sources were available — the RNG implementation itself is deterministic, it merely convert data with supposed entropy from a set of data sources and then generate an output stream.

In some situations, like on virtualized environments or on small embedded systems, it is hard to find sources of sufficient quantity. Rarely are there any lower-bound estimates on how much entropy there is in the data you get. You can improve the RNG issue by using a separate hardware RNG, but there is deployment complexity in that, and from a theoretical point of view, the problem of trusting that you get good random data merely moved from one system to another. (There is more to say about hardware RNGs, I’ll save that for another day.) 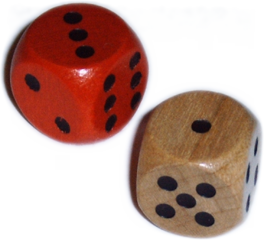 For some purposes, the available solutions does not inspire enough confidence in me because of the high complexity. Complexity is often the enemy of security. In crypto discussions I have said, only half-jokingly, that about the only RNG process that I would trust is one that I can explain in simple words and implement myself with the help of pen and paper. Normally I use the example of rolling a normal six-sided dice (a D6) several times. I have been thinking about this process in more detail lately, and felt it was time to write it down, regardless of how silly it may seem.

A die with six sides produces a random number between 1 and 6. It is relatively straight forward to intuitively convinced yourself that it is not clearly biased: inspect that it looks symmetric and do some trial rolls. By repeatedly rolling the die, you can generate how much data you need, time permitting.

I do not understand enough thermodynamics to know how to estimate the amount of entropy of a physical process, so I need to resort to intuitive arguments. It would be easy to just assume that a die produces 2.5 bits of entropy, because log_2(6)~=2.584. At least I find it easy to convince myself intuitively that 2.5 bits is an upper bound, there appears to me to be no way to get out more entropy than that out looking at a die roll outcome. I suspect that most dice have some form of defect, though, which leads to a very small bias that could be found with a large number of rolls. Thus I would propose that the amount of entropy of most D6’s are slightly below 2.5 bits on average. Further, to establish a lower bound, and intuitively, it seems easy to believe that if the entropy of particular D6 would be closer to 2 bits than to 2.5 bits, this would be noticeable fairly quickly by trial rolls. That assumes the die does not have complex logic and machinery in it that would hide the patterns. With the tinfoil hat on, consider a die with a power source and mechanics in it that allowed it to decide which number it would land on: it could generate seamingly-looking random pattern that still contained 0 bits of entropy. For example, suppose a D6 is built to produce the pattern 4, 1, 4, 2, 1, 3, 5, 6, 2, 3, 1, 3, 6, 3, 5, 6, 4, … this would mean it produces 0 bits of entropy (compare the numbers with the decimals of sqrt(2)). Other factors may also influence the amount of entropy in the output, consider if you roll the die by just dropping straight down from 1cm/1inch above the table. There could also be other reasons why the amount of entropy in a die roll is more limited, intuitive arguments are sometimes completely wrong! With this discussion as background, and for simplicity, going forward, I will assume that my D6 produces 2.5 bits of entropy on every roll.

We need to figure out how many times we need to roll it. I usually find myself needing a 128-bit random number (16 bytes). Crypto algorithms and protocols typically use power-of-2 data sizes. 64 bits of entropy results in brute-force attacks requiring about 2^64 tests, and for many operations, this is feasible with today’s computing power. Performing 2^128 operations does not seem possible with today’s technology. To produce 128 bits of entropy using a D6 that produces 2.5 bits of entropy per roll, you need to perform ceil(128/2.5)=52 rolls.

We also need to design an algorithm to convert the D6 output into the resulting 128-bit random number. While it would be nice from a theoretical point of view to let each and every bit of the D6 output influence each and every bit of the 128-bit random number, this becomes difficult to do with pen and paper. Update:This blog post used to include an algorithm here, however it was clearly wrong (written too late in the evening…) so I’ve removed it — I need to come back and think more about this.

So what’s the next step? Depends on what you want to use the random data for. For some purposes, such as generating a high-quality 128-bit AES key, I would be done. The key is right there. To generate a high-quality ECC private key, you need to generate somewhat more randomness (matching the ECC curve size) and do a couple of EC operations. To generate a high-quality RSA private key, unfortunately you will need much more randomness, at the point where it makes more sense to implement a PRNG seeded with a strong 128-bit seed generated using this process. The latter approach is the general solution: generate 128 bits of data using the dice approach, and then seed a CSPRNG of your choice to get large number of data quickly. These steps are somewhat technical, and you lose the pen-and-paper properties, but code to implement these parts are easier to verify compared to verifying that you get good quality entropy out of your RNG implementation.